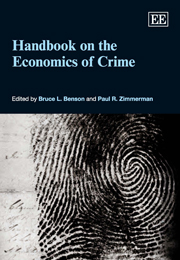 Handbook on the Economics of Crime

While few economists analyzed criminal behaviour and the criminal justice process before Gary Becker’s seminal 1968 paper, an enormous body of economic research on crime has since been produced. This insightful and comprehensive Handbook reviews and extends much of this important resulting research.

Carlisle E. Moody INTRODUCTION According to the Supreme Court brief filed by the District of Columbia in defense of its handgun ban, handguns are used in 54 percent of all murders, 60 percent of all robberies, and 87 percent of all murders of police officers. In 1974 handguns were used to commit 155 of the 285 murders in the District that year. The brief also noted that, ‘Although only a third of the Nation’s firearms are handguns, they are responsible for far more killings, woundings, and crimes than all other types of firearms combined.’ And, ‘People who live in houses with firearms, particularly handguns, are almost three times more likely to die in a homicide . . .’ (District of Columbia, 2008, p. 52). There is also some academic evidence that guns cause crime, especially homicide. According to the Harvard Injury Control Research Center, a survey of the literature by Hepburn and Hemenway (2004) found that ‘A broad array of evidence indicates that gun availability is a risk factor for homicide, both in the United States and across highincome countries. Case-control studies, ecological time-series and cross-sectional studies indicate that in homes, cities, states and regions in the US, where there are more guns, both men and women are at higher risk for homicide, particularly firearm homicide.’1 Also, the Coalition for Gun Control concludes that ‘The link between accessibility to firearms and death rates has been suggested in a number of studies . . . [a] review of 13 countries showed that there was a strong...