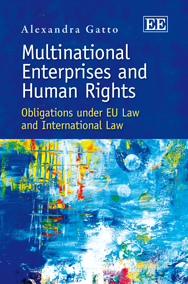 This well-researched book examines how the European Union could do more to ensure that EU-based multinational enterprises (MNEs) respect human rights when operating in third world countries. Alexandra Gatto identifies the primary obligations of MNEs as developed by international law, and investigates how the EU has promoted the respect of human rights obligations by the MNEs to date.

1.1 INTRODUCTION Multinational enterprises (MNEs) are very powerful actors in the current world order. The turnover of these multinationals is growing faster than the world social product. The universe of MNEs now spans 82 000 parent companies worldwide, with 810 000 foreign affiliates. And their combined value-added accounted for roughly 4 per cent of world GDP, a share that has remained relatively stable since 2000.1 However, 85 per cent of the largest companies are based in the United States (US), the European Union (EU) and Japan. In particular 54 per cent of them are based in the EU.2 About one-third of world trade takes place within groups of MNEs. The economic power of MNEs has been strengthened by the process of globalization. What is commonly defined as globalization refers to a set of far-reaching changes in the global economy and in the regulation of international trade since the 1970s.3 As a consequence of the collapse of the Bretton-Woods system and the oil crisis, the flexibility of exchange rates stimulated the growth in financial speculation and enhanced dependence on OPEC countries. At the same time, international trade barriers and exchange controls were loosened between North America and Western Europe, so that from the 1980s the integration of global capital and commodity markets intensified.4 The reduction of trade and non-trade barriers and the reduction of public control on foreign investment was followed by the reduction of governments’ economic role through privatization of public enterprises. This ongoing process was reinforced by the development...