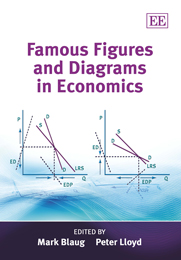 John Creedy The Edgeworth box, with its associated concepts of indifference maps and the contract curve, provides one of the most widely used diagrammatic tools in economics. Taking Jevons’s (1871/1957) basic two-person twogood exchange model as his starting point, Edgeworth (1881) showed that for two individuals engaged in barter there is a range of efficient trades: these define the contract curve.1 If a settlement is not on the contract curve, movement to it can make one person better off without the other being worse off. Movement along the contract curve involves one trader becoming worse off while the other gains. Defining indifference curves as showing combinations of amounts consumed for which utility is constant, the contract curve is the locus of points of tangency between traders’ indifference curves, between limits given by their pre-trade curves (those going through the endowment point). The resulting ‘indeterminacy’ regarding the ‘final settlement’ gave rise, in Edgeworth’s view, to a need for arbitration. He showed that the utilitarian optimal position (which maximises total utility) is on the contract curve. This led to his ‘neocontractarian utilitarianism’ argument: risk-averse traders who consider all outcomes as equally likely would accept the utilitarian arbitration because it corresponds to their long-run expected position.2 The same diagram illustrates a price-taking equilibrium, whereby one or more of the mutual tangency positions also corresponds to tangency with a straight line going through the endowment point, whose slope represents the exchange ratio (and hence relative price). Individuals acting in isolation, taking prices as given...