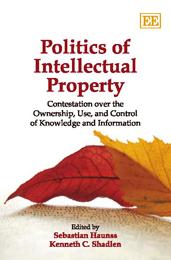 Contestation Over the Ownership, Use, and Control of Knowledge and Information

This book offers empirical analyses of conflicts over the ownership, control, and use of knowledge and information in developed and developing countries.

Ingrid Schneider Traditionally, patent governance has been confined to a closed, selfregulated community of patent lawyers and technicians in patent offices and courts. Biotechnology patents, however, brought a highly complex and seemingly distant issue area into the public sphere. The patenting of “biological material”, such as cells, genes, plants and animals, has become a contentious issue and induced political mobilization. While these controversies arose in many countries, it was only the European Union which dealt with them by technology specific patent legislation (European Union 1995). This happened due to some special, incomplete features of the supranational European patent system, particularly the lack of a European Patent Court, and the institutional split between the European Patent Organisation and the European Union. However, this legislative governance provided a public arena for deliberation on these issues which both responded to and went beyond the contestation of biopatents in civil society. The treatment of biotechnology patents as addressed in the legislative arena differed from their treatment in the traditional legal and administrative arenas. Parliaments played a vital role in introducing new perspectives, and in reframing patent law as regulatory law. My proposition is that legislative action in this case actually made a difference, as it provided an important catalyst for the European patent system, opened up the arena of decision-making for other stakeholders, and reconceptualized patents as a political issue. As I will argue, the politicization of biopatents has impacted upon the evolution of the patent system and its historical confinement to patent attorneys,...