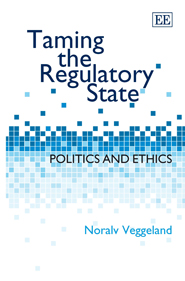 Taming the Regulatory State incisively analyses the regulatory top-down regimes that are currently dominant and in crisis. Taking a critical perspective, the book offers an account of the inherent vulnerability of the regulatory state caused by one-sided economic thinking and the predominance of governing through hard regulation.

Chapter 2: Political Economy: The Background of the Regulatory State

TAMING PRINCIPLES OF THE PREKEYNESIAN STATE An Introductory Story In 2008, it has been 75 years since Franklin Delano Roosevelt (Democrat Party) became the thirty-second President of the US. The event took place in the worst phase of the Great Depression of the 1930s. The unemployment rate was 25 per cent. About two million people had become homeless. Pressed by high loans, the banks chased farmers from their land when the prices fell 60 per cent. Industrial production sank to half the volume before 1929. Capitalists ran away from Wall Street. On the inaugural day, banks in 31 of the 48 states, and in Washington DC, closed their doors and did not open the day after. In his inaugural speech, Roosevelt attacked financiers and bank managers: it was time for the first New Deal initiative (1933–34), the use of public money to increase the general demand in the economy, the Keynesian economic idea. His taming programme was the 3-Rs: Relief, Recovery and Reform, which he used to explain to the people through radio talks he frequently gave. The second New Deal (1935–36) paid attention to the farmers and the farming industries. It was not for nothing that Roosevelt was re-elected in 1936, 1940 and 1944. The interventionist state’s macroeconomic form of planning that developed just after World War II was a clear answer to the structural economic crisis of the inter-war period of the 1920s and 1930s. The legitimacy that this form of planning gave the state to...