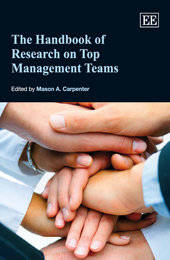 The Handbook of Research on Top Management Teams

Edited by Mason A. Carpenter

This Handbook presents original research and theory on executives, top management teams, and boards of directors and illustrates the vital importance of this field of study.

Chapter 15: CEO Dismissal: The Role of the Broader Governance Context

Joseph B. Beck and Margarethe F. Wiersema While the perquisites of a Chief Executive Officer (CEO) are many, it is increasingly apparent that job security cannot be listed among them. Recent research has shown that the incidence of CEO dismissal (involuntary turnover) has risen significantly not just in the US, but in Germany, France, and Japan as well (Denis and Denis, 1995; Huson et al., 2001; Lucier et al., 2007). The rate of involuntary CEO succession has increased from 13 percent in the 1980s to 39 percent in 2000 (Wiersema, 2002), with one major consequence being that the average tenure of a CEO has dropped from 8.8 years in 1995 to 7.2 years in 2007 (Karlsson et al., 2008).1 In terms of causal factors, prior research has clearly shown that CEO succession events tend to be preceded by poor financial performance (Coughlan and Schmidt, 1985; Warner et al., 1988; Weisbach, 1988; Murphy and Zimmerman, 1993), and that poorly performing firms are more likely to incur involuntary CEO turnover (Denis and Denis, 1995; Denis and Serrano, 1996; Mikkelson and Partch, 1997; Denis and Kruse, 2000). However, past financial performance alone cannot explain the increased propensity on the part of corporate boards of directors to undertake an action as drastic as dismissal of the firm’s CEO. For example, the credibility of the CEO – whether or not he/she can be trusted – has also been shown to have an impact on CEO turnover: those CEOs of firms that file financial restatements are twice...