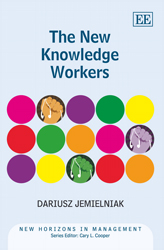 This critical ethnographic study of knowledge workers and knowledge-intensive organization workplaces focuses on the issues of timing and schedules, the perception of formality and trust and distrust in software development as well as motivation and occupational identity among software engineers.

INTRODUCTION The first of the topics often related to during the conducted interviews was attitude toward procedures and the formal organization. It is worth starting its analysis by taking a broader look into the bureaucracy phenomenon in modern organizations. As Joan Greenbaum (1998) very rightly points out, while the factory worker in Charlie Chaplin’s Modern Times, reflecting Taylor’s production line work system, could serve as an archetype of a worker of the industrial era, it is Dilbert, a character from the popular comic strip by Scott Adams, who offers himself as the symbol of our times – an intelligent software engineer who has to struggle with the stupidity of his supervisors and the paradox of his bureaucratic organization. Both knowledge workers and professionals are often described in the context of bureaucracy. On the one hand, as in Henry Mintzberg’s (1993) view, they are seen mostly as enforcers of a given standard and key members of a bureaucratic organization. On the other hand, the creative aspect and original character of their work is often emphasized (Powell et al., 1999). For some researchers, the post-industrial era can even be called “post-bureaucratic” because the most important social changes relate to the development of the “organization of the future”, which is a contradiction of traditional bureaucratic rules (Argyris, 1973; M. Weber, 2001). Hence, it is worth analyzing modern bureaucracy in the contexts of both professionals and knowledge workers. POST-BUREAUCRACY Bureaucracy does not have many supporters, and probably never had. It used to have strong enemies...