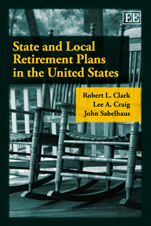 State and Local Retirement Plans in the United States

State and Local Retirement Plans in the United States explains how economic and political events have shaped the development of pension plans in the last century, and it argues that changes in the structure and generosity of these plans will continue to shape policy and funding in the future. It also brings to bear a new rationale to the policies behind public sector pension plans. The authors use the history of how early public pension plans were established, how they matured and how they have grown in generosity to analyse what changes may be expected in years to come. Unique in its scope, this comprehensive history of the development of public sector pension plans in the United States during the twentieth century expands upon current ideas relating to the changing economic environment, the passage and evolution of social security, and the expansion of the public sector.

The funding of state and local retirement plans has become a major policy issue and a concern for state and local governments. Historically, the vast majority of state and local pension plans were defined benefit plans, and that situation remains in place today. Depending on which methodology one chooses, as of 2010, these plans are collectively between $1 and $5 trillion underfunded (Novy-Marx and Rauh, 2009 and 2010; Biggs, 2010; Pew Center on the States, 2010). Measuring the financial status of any defined benefit retirement plan involves comparing the present value of liabilities to the value of plan assets. There are crucial assumptions and philosophical decisions, as well as technical accounting issues that go into the calculation. The most contentious issue revolves around the choice of an appropriate discount rate for converting the stream of future benefit liabilities into a present value, but there is also disagreement about how to account for changes in the value of plan assets at any point in time. Resolving issues like these, as well as developing informative measures of plan solvency, are more critical now than ever, because the state and local workforce is aging and the pension bills are rapidly coming due. This urgency is reinforced by recent stock market losses that have had a substantial impact on the market value of plan assets. At the same time, the tax base has shrunk with the economy during the worst recession since the 1930s. One key to understanding the debate about public pension funding...