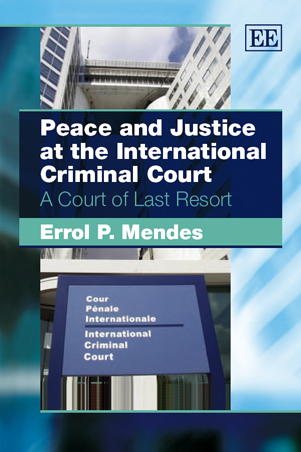 Peace and Justice at the International Criminal Court

A Court of Last Resort

This authoritative book addresses the greatest challenge facing the International Criminal Court since its historic establishment in 1998: reconciling the demand for justice for the most serious crimes known to humanity with the promotion of sustainable peace in conflict areas around the world.

Chapter 2: Is it Peace or Justice that Ends the Alleged First Genocide of the 21st Century?

RETALIATION AGAINST THE WRIT OF JUSTICE 1. On July 8, 2008, in the killing fields of Darfur, an estimated 200 Arab Janjaweed fighters on horseback and 40 heavily armed vehicles ambushed U.N. peacekeepers in the under-resourced UNAMID mission, killing seven peacekeepers with twenty-two others wounded (seven critically) during a confrontation that lasted more than two hours. The peacekeepers were killed as they were on a military patrol investigating the killing of two rebel soldiers in North Darfur. The casualties included five Rwandan soldiers and two police officers from the same country, together with one soldier from Ghana and one from Uganda. U.N. Secretary General Ban Ki-Moon condemned the attack as an unacceptable act of extreme violence in the strongest possible terms.1 BBC Reporter Laura Trevelyan reported that some U.N. officials suspected the ambush was orchestrated by the Sudanese government with its Janjaweed proxies in retaliation for a possible imminent indictment of a high level Sudanese official, perhaps even President al-Bashir. The Janjaweed’s hostility could be linked to the fear that the UNAMID force could be used to arrest those indicted by the International Criminal Court (ICC).2 The BBC report was, in part, confirmed when prosecutors at the Court ruled that they would present evidence that supported charges of war crimes, crimes against humanity and genocide against President Omar al-Al-Bashir himself. On July 14, 2008, the Chief Prosecutor, Luis Moreno-Ocampo, presented the evidence to the Pre-Trial Chamber of the ICC seeking an arrest warrant that would be issued against the...