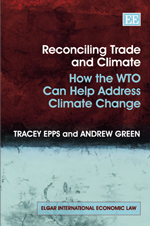 How the WTO Can Help Address Climate Change

This timely book addresses the interaction between policies addressing climate change and the rules of the WTO. The authors expertly examine the law and economics behind the application of trade rules in the area of climate, including the implications of WTO rules for domestic climate measures, the unilateral use of trade measures to attempt to force other countries to take climate action, and the role of trade measures in multilateral climate agreements. The book argues that while there is a possibility of conflict between international trade rules and progress on climate change, it need not be the case. Thus the major focus is on the ways in which trade measures can aid in addressing climate change.

WHY SUBSIDIZE? Instead of imposing costs on individuals to force them to address climate change, many countries provide subsidies. There are subsidies for wind power, for biofuels, for research and development, for individuals to insulate their homes or to purchase energy efficient appliances and for carbon sinks. Some of these subsidies may be useful elements of a country’s climate change plan. Yet, as with tariffs, regulations and taxes, subsidies have trade impacts. They can hinder access of exports from non-subsidizing countries to the markets of the subsidizing country or third countries. They can also lead to displacement of domestic products in home markets of non-subsidizing countries. This chapter examines the WTO rules relating to subsidies and what they mean for domestic climate change policies. As it turns out, WTO rules on subsidies are quite strict, particularly for export subsidies. We first look at why countries may want to use subsidies and the potential advantages and disadvantages of this approach to climate change. We then turn to the specific WTO rules and examine what constitutes a subsidy under WTO agreements and the basic rules around both domestic and export subsidies. Finally, we draw together some of the lessons from the chapter to return to our central questions about whether WTO rules can address climate change effectively, and the implications of the rules for who determines what policy choices are permissible. 7.1.1 Subsidies and Externalities Many countries have turned to subsidies as a primary means of addressing climate change. While economists tend...