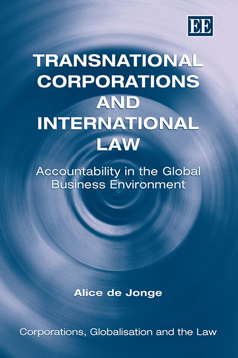 Accountability in the Global Business Environment

Chapter 1: The Corporation: A Good Tool but a Bad Master

A. INTRODUCTION The corporation has been described as ‘the most effective structure for capital accumulation’, having ‘the potential to demonstrate an effective management system’ because ‘it allows a separation of ownership from management’.1 In other words, the usefulness of the corporate form – indeed the very basis of its creation and continued existence – stems from the fact that the ‘corporate body is not a natural person but has legal personality attributed to it by the law … Additionally it has a legal persona separate from that of its investors’.2 But the corporation, particularly the global corporation, is also much more that a legal concept. It is, increasingly, a very significant economic, political and social presence in today’s world.3 According to the 2009 World Investment Report by the United Nations Conference on Trade and Development (UNCTAD), there were, in 2009, an estimated 82,000 transnational corporations (TNCs) worldwide, with 810,000 foreign affiliates.4 The Report goes on to note that ‘these companies play a major and growing role in the world economy. For example, exports by foreign affiliates of TNCs are estimated to account for about a third of total world exports of goods and services, and the number of people employed by them worldwide totalled about 77 million in 2008 – more than double the total labour force of Germany’.5 It has been estimated that of the top 100 economies in the world, 51 are corporations and only 49 are states.6 The fundamental role played by TNCs in global trade and the global...