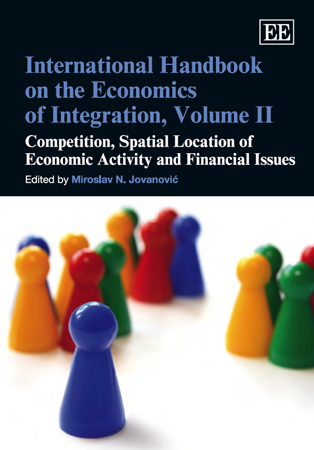 International Handbook on the Economics of Integration, Volume II

With this Handbook, Miroslav Jovanović has provided readers with both an excellent stand-alone original reference book as well as an integral part of a comprehensive three-volume set. This introduction into a rich and expanding academic and practical world of international economic integration also provides a theoretical and analytical framework to the reader, presenting select analytical studies and encouraging further research.

Chapter 1: Institutional Competition in the European Union: Causes and Consequences of the Drive to Harmonise

Victoria Curzon Price 1 INTRODUCTION Up to and even including the Treaty of Lisbon,1 the European Union (EU) is far from being a fully fledged federal state, yet it is much more than a mere free trade area. Member governments initially enjoyed unquestioning public support for European integration, but over time this support gradually waned, leaving the Union stuck in an uncomfortable half-way house. The European economy is arguably more integrated than even that of old federal structures such as the United States of America or Switzerland, but political sovereignty remains, at least nominally, in the hands of member states. Economic integration has proceeded far faster and far further than even the wildest optimists believed possible at the outset, but political integration has proved elusive. Non-elected decisionmaking European institutions somehow skated along on the thin ice of multilayered governance, qualified majority voting, consultation and ‘consensus’, while having to cope at the same time with growing public disaffection. The European Parliament, despite being an elected assembly, somehow has not managed to convince voters of its relevance. National governments are also in an awkward position. Economic integration combined with political disintegration is something no national politician would have consciously chosen. For one thing, it forces governments into ever fiercer institutional competition with one another. Hence the drive to harmonise. However, harmonisation of laws also has its drawbacks, not least because national parliaments (and to some degree, the electorate itself) are beginning to feel that their democratic right to decide important matters...