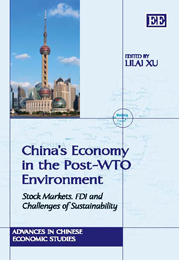 China’s Economy in the Post-WTO Environment

The book explores the implications of both the extension of the market into key parts of the Chinese economy and the integration of China into the global economy. The main focus of the book is on the role and nature of China’s financial system and its ability to transform enterprise and household behaviour and the performance of investment finance, notably in the context of a two-way flow of foreign direct investment. All the extensive chapters highlight the issue of sustainability – some see the incompleteness of market reform as a problem; others are more willing to accept a pragmatic blending of the operation of the free market and government intervention.

Chapter 9: RMB Appreciation or Fiscal Stimulus, and their Policy Implications

James Xiaohe Zhang INTRODUCTION Despite the accumulated appreciation of the Renminbi (RMB) against the US dollar by more than 22 percent in nominal terms between 2005 and 2010, China’s exports keep growing and its trade surplus continues to surge. It is reported that when the RMB broke 7 RMB per US dollar for the first time in 13 years, China’s current account surplus hit a historical record of US$296 billion in 2008, accounting for 10 percent of its GDP. This surge has not been disrupted by a continuing appreciation of the RMB in 2010, beating market expectations (BBC, 2010). As a result, China’s foreign exchange reserve keeps growing. By June 2010, the reserve had accumulated to over $2.45 trillion. When the surge of trade surplus and hence the accumulation of foreign exchange reserve both hit a record in history, several domestic issues also emerged. Firstly, despite China’s official registered urban unemployment rate having been maintained at a low level somewhere between 4–5 percent, the real figure is much higher because many of the country’s more than 200 million rural migrant workers, who have flocked to the cities in recent years, are not registered. More than 20 million migrants who lost their jobs in the current crisis are still out of work. Taking these laid-off migrant workers into account and dividing both the registered unemployed and laid-off migrant workers by an estimated labor supply of 830 million would result in a higher real urban unemployment rate of 6–7...