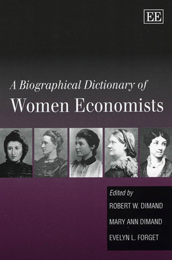 Palma, G. (1987), ‘Dependency’, in J. Eatwell et al. (eds), The New Palgrave: A Dictionary of Economics, vol. 1. London: Macmillan. Possas, M. and P. Baltar (1981), ‘Demande Efetiva e Dinamica em Kalecki’ (‘Kalecki on Effective Demand and Economic Dynamics’), Pesquisa e Planejamento Economico, 11(1), 107–60. Taylor, L. (1991), Income Distribution, Inﬂation and Growth: Lectures on Structuralist Macroeconomic Theory, Cambridge, MA: MIT Press. Wells, J. (1977), ‘The Diffusion of Durables in Brazil and its Implications for Recent Controversies concerning Brazilian Development’, Cambridge Journal of Economics, 1(3), 259–79. Marguerite Thibert (1886–1982) Marguerite Thibert was born Marguerite Javouhey, the daughter of a hardware wholesaler on 31 January 1886 at Chalon-sur-Saône (Saône-et-Loire), France. She earned her brevet supérieur at a Dominican school and then, with her sister, prepared privately for her baccalauréat examination. She married Georges Thibert, an architectural student, in 1912. When he was appointed architect of the National Assembly, she moved with him to Paris, where he died in 1915. Thibert continued her study of philosophy, and after earning her licence began to teach at Sévigny College in 1917. She decided to write a doctoral thesis entitled Le féminisme dans le socialisme français, de 1830 à 1850 under the direction of Célestin Bouglé. This she completed in 1926, becoming the fourth woman docteur ès-lettres in France. From that time, she was in contact with the feminist lawyer Marcelle Kraemer-Bach and Cécile Brunschvicg, president of the Union fran...